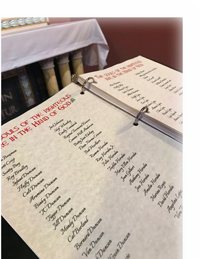 Request your personal prayer petition(s) be heard in the prayers and Masses of The Servants of Mary.

If you want others to join in your prayers, indicate that your prayer can be posted on this page. Otherwise, we will keep your prayer among the Servite Fathers and Brothers only

Prayer Petition for: Physical health
Please pray for me. I was just diagnosed with colon cancer. Thank you.

I am concerned about a special friend who seems to be much too interested in playing poker, going to casinos, doing pull tabs & bingo playing & then also getting side tracked w/ women who seem to be of questionable character. This is a particular concern since he already had 2 bad ex's which ended in divorce & he has raised 3 children by himself & now has custody of a grandchild due to the mother being a drug addict & his son not a responsible father ( but who he still forces the child to spend time with him though the child objects). He seldom goes to church anymore which concerns me cause I feel it has been affecting him negatively though he claims he depends on the Lord's leading in his life. He is just in the process of changing to a new location for a similar job with the same boss & I am hoping & praying he can find some male mentors & break his old bad gambling habits & the not taking his grandson to church because he is so difficult to watch. The grandson did not even know that Christmas was about the birth of Jesus & not just about getting presents.
He is trying to sell his house & find a different one to buy in his new location but so far has to settle for a house to rent which could become costly if he cannot sell his house for a while etc. He also needs much healing since he was the black sheep of his family & his father had been an alcoholic & hated him to the extent that he left him out of his will & still expected him to take care of his mother when he died, which he did way beyond duty & she did not treat him the best either & expected him to pay her rent when he was already paying for so many of her expenses. He of course also needs much healing due to the bad x's & should really get those "marriages" annulled, but he is not Catholic & for some reason has some very strong prejudices against the catholic church which he wants to pass on to his grandson. Please pray for
all of his spiritual,emotional,physical needs etc.& that he accepts the things I had to say to him recently in a letter that I sent to him. And so God's will may be done in his life since he really is such a wonderful person in soo many ways!!!

Prayer Petition for: Return to the Church
Please pray for Eric. Please pray for his salvation. It said that The Prodigal Son came to himself and returned to the Father’s House. Pray God to give Eric the grace to come to himself, turn to Jesus, repent, and be saved. May he find grace, mercy, and forgiveness in the Crucified Saviour and New Life through the Resurrected Saviour.

Please pray for my husband Silvio who is in ICU since Thursday that The Lord will grant him health of body, mind & soul. For me that the chronic cancer that I have "CLL" be cure and that the fevers that I have been having since September of last year do not come back. For the Pet Scan I'm having on Monday shows no worsening of my cancer. That The Lord will grant my husband, my daughters and me the graces needed. The return of my daughters to the church & the sacraments and that they find work. Please Lord have mercy on us.

Please pray for my son who has terminal cancer and is far from the Catholic church. His cancer has come back from his esophagus to his liver, adrenaline glands, and his esophagus again! He was in the Air Force for 21 yrs. and is still trying to work. He was told he has 7 more treatments every 2 wks then a pill will be given. I am grateful he is gaining weight finally. He is 48 and has a 23 yr old daughter who has been supported mostly by her dad. She was baptized Catholic but has never been raised Catholic, as her mother divorced due to her infidelity.
They live far away. Please pray for a miracle! Thank You! God's Blessings!

My daughter, 25 years old, had a dream of being a physical therapist, but has now been rejected by all 5 grad schools she applied to. She now doesn’t know what to do with her life and feels lost. Please pray for her to discover God’s will and special plan for her life. She also believes she has met Mr. Right, and they would like to get married soon and have a family. But life is so expensive nowadays, she is afraid it isn’t possible. So she really needs hope and strong faith in God - don’t we all?

I ask God, Help us stop worshipping machines. Reveal to us the falseness of the value we place in Machinery.
I thank God for this Grace.

Rebekah L, 14 years old has rare cancer metastasized in liver, lymph nodes & lungs. No conventional treatment available. Parents need funds to pay for alternative medicine treatments as they are not covered by insurance.