Feast of Our Lady of Sorrows

Simeon blessed them and said to Mary, his Mother, “This child is destined to be the downfall and the rise of many in Israel, a sign that will be opposed; and you yourself shall be pierced with a sword.” (Luke 2: 34-35) 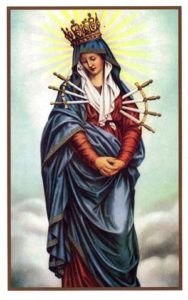 She stood there in awe of the love with which God loved the world and the Son’s obedience to his Father. She marvelled at her son’s strength in combating the demons and his patience in such great suffering. She stood there filled with wonder before the mystery of human salvation and she was model and example for the entire Church of unwavering strength in adversity. With courage she drank of the most bitter chalice prepared for her by God. In this way she fully participated in the passion of her son.

If Christ suffered and left us an example to follow, so, too, did Mary his Mother in her sufferings. Together with her son she has left us an example so that we might do as she did, never taking our eyes from the divine model given us on Calvary. Let us contemplate this example so that we can deliberately imitate Christ and his most holy Mother. Let us reflect again on the contradictions she suffered because of sinners so that we might not become discouraged or lax on our journey toward sanctity and salvation. May Mary remain for us a model of constant and victorious endurance and unwavering virtue and courage so that neither tribulation nor worldly creatures may ever separate us from the love of Christ. (St. Lawrence of Brindisi)

The blessed Virgin Mary, sharing the redemptive work of Jesus, was obedient to the will of the Father.

– She became a cause of salvation for herself and all people.

What Eve had bound by lack of faith, Mary set free by total faith.

– She became a cause of salvation for herself and all people.

Father, as your Son was raised on the cross, his mother Mary stood by his side, sharing his sufferings. May your Church be united with Christ in his suffering and death and so come to share in his rising to new life. We ask this through our Lord Jesus Christ, your Son who lives and reigns with you and the Holy Spirit, one God, for ever and ever.

Back to Our Lady of Sorrows Novena Prayers

Send us your personal petition